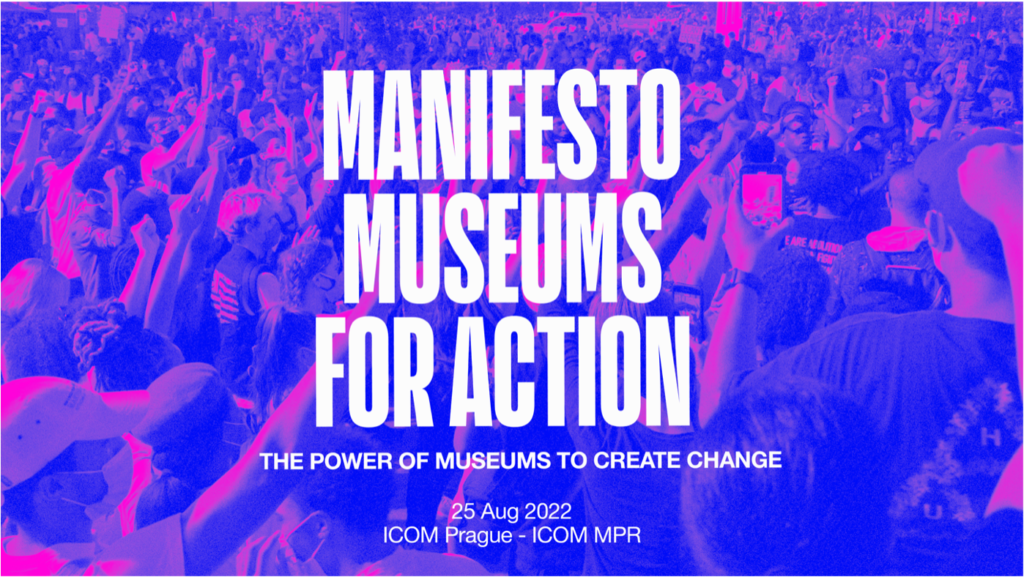 The ICOM MPR Manifesto for Museums Action was the International Committee for Marketing and Public Relations (ICOM-MPR) culminating activity during the International Council of Museums (ICOM) 26th Annual General Conference 2022 in Prague, Czech Republic. The theme of the conference was The Power of Museums. Following two sessions of ICOM-MPR presentations in previous days on the themes of The Power of Museums to Inspire and Engage in Conversation, the Manifesto Museums for Action participatory activity took place on August 25 at the end of ICOM-MPR’s off-site, all-day Power of Museums to Take Action event at Kampus Hybernská.

A map to turn beliefs, inspiration, and hope identified during the conference into action

Preceded by Luis Marcelo Mendes’ presentation of the results of the online survey made by Cultiva with museum professionals worldwide to understand if our institutions are ready for the new museum definition, the Manifesto for Action activity downloaded the takeaways of the more significant global conference and the new definition of museums and turned them into an inspirational declaration of change. The objective was to co-create the Manifesto as a tool for museums and museum professionals to manifest their power to take action by defining key areas and overcoming barriers, leading the way to positive impact, as well as inspire future ICOM-MPR membership activities that address important topics, including, but not limited to sustainability, diversity, inclusion, equity, education, enjoyment, participation, and accessibility.

The visual identity of the Manifesto used on promotional materials and videos was designed by Marga Oller, associate partner at the design agency Mucho, Barcelona.

The vision behind participation in the Manifesto on August 25 was that if we, as museum professionals, want to embrace change, then we need to start with changing the way we work as a sector and embrace collaboration and the actions we take more than ever before. We provided space and a forum to engage and work together as a community that encouraged participation and interaction. A total of 22 participants and six coaches from around the world participated in this opportunity to discuss and develop a proposal.

The activity was carefully tailored using the research of best practices in Manifesto development, backed by the experience of the facilitators in driving collaborative creative practices and having discussions with other members, such as Luis Marcelo Mendes, who contributed with his input on the structure. The programme provided a framework for the coaches to lead their teams in the form of engaging exercises.

The activity started with an introduction explaining the activity’s objectives and asking participants if they had been involved in a Manifesto before and the purpose it served, as well as proposing that everyone, as ICOM MPR members in communications, take an active role in driving change. Participants were divided into four groups, two made of five and two made of six participants each, with one coach per team.

Following the introduction, there was a workshop divided into three parts, in which participants could:

The outcome of each group was shared with the whole group, and all participants signed the Manifesto to mark the moment.

The outcome of the Manifesto

The areas stated offer an opportunity for ICOM-MPR to initiate activities that will enable our colleagues to create change together.